Norris Tratnik shows a photo of the coal camp at Star Mine at the “Coal Camps and Memories” night on Thursday, Sept. 6, at the Fossil Country Frontier Museum in Kemmerer. (GAZETTE PHOTO / Michelle Tibbetts)

On Thursday, Sept. 6, the Fossil Country Frontier Museum hosted “Coal Camps and Memories,” a fundraising dinner which focused on the history of life in the old coal mining camps such as local mines Blazon and Star. Folks from town and beyond came to join in the discussion about the unique lifestyle and conditions endured in those coal camps.

The museum board members served a delicious family-style meal of polenta, which was a common staple in the camps. The majority of workers in the coal mines were immigrants, and they brought with them many of the traditions from their homelands, including their polenta copper pots. Teri and Paul Picerno used a family recipe from Paul’s grandmother to cook the polenta. The dish is traditionally prepared with rabbit, but chicken was substituted for the dinner. 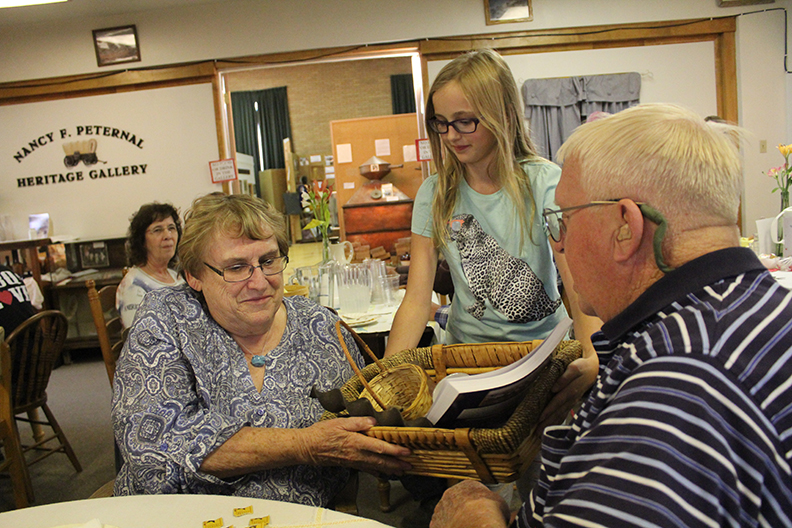 Dorothy Wright, who co-wrote the book “Echoes of Elkol” with Norris Tratnik, examines a gift basket at the “Coal Camps and Memories” dinner at the museum on Thursday, Sept. 6. (GAZETTE PHOTO / Michelle Tibbetts)

Attendees enjoyed sharing their stories and memories of coal camps and the struggles those early miners and families went through.

Many locals have become historians on the subject of coal camps, and have even published a few books on the local coal mining camps. Local historians Frank Scigliano, Norris Tratnik and Dorothy Wright were among the locals leading the dinner conversations.

There is so much history in the minds of Kemmerer and Diamondville residents that is just waiting to be shared. One man at the dinner shared his story of how his father died in a coal mining accident. His widowed mother raised three children all alone on 19 cents a month from social security. He fought back tears as he reflected on those times and how it has formed him into the man he is today.

“I don’t waste anything now, not even the heals on the loaf of bread,” the man said. The local coal mining industry had its share of tragedy, with many explosions and cave-ins taking the lives of coal camp residents. 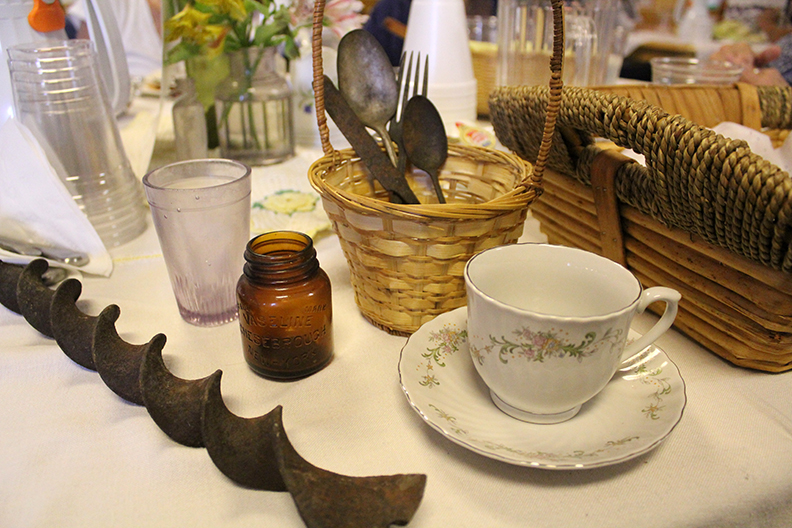 Old items that have been found at local abandoned coal mining camps were displayed and raffled off at the museum dinner on Thursday, Sept. 6. (GAZETTE PHOTO / Michelle Tibbetts)

One attendee said, “My generation has seen many losses from the mining industry. It is hard to find anyone our age that wasn’t touched in some way by a mining accident.”

The museum also raffled off a few gift baskets with books on local mines, and historical artifacts that were found over the years in the abandoned camps. It was common for people to discard items and hide personal belongings in the outhouse pits. Historians today enjoy digging up these old pits to find many interesting items.

Residents can learn more about the history of the mining industry in Diamondville and Kemmerer by visiting the Fossil Country Frontier Museum or visiting with locals who are eager to share their wealth of historical knowledge.

The  museum’s “Coal Camps and Memories” dinner was a great way to remind the community of our rich history, and that nothing comes for free. The museum features plenty of the area’s history for those wanting to learn more. 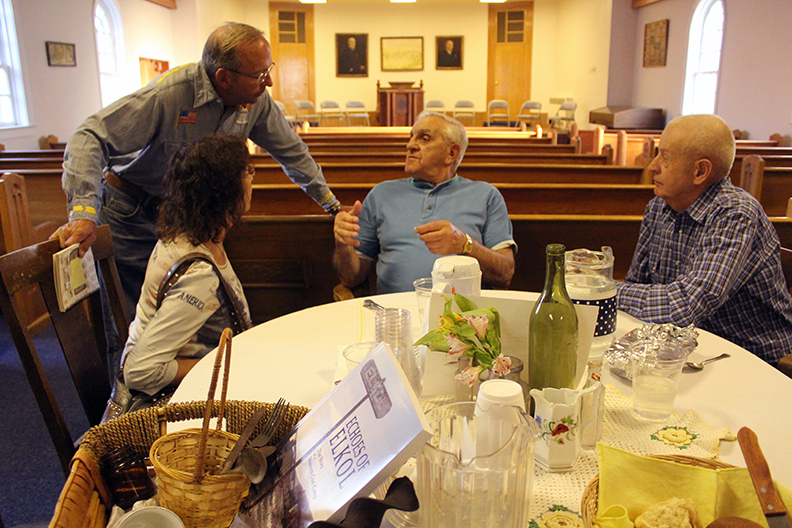 The event was an opportunity for locals to discuss the history of coal mining in the area. (GAZETTE PHOTO / Michelle Tibbetts) 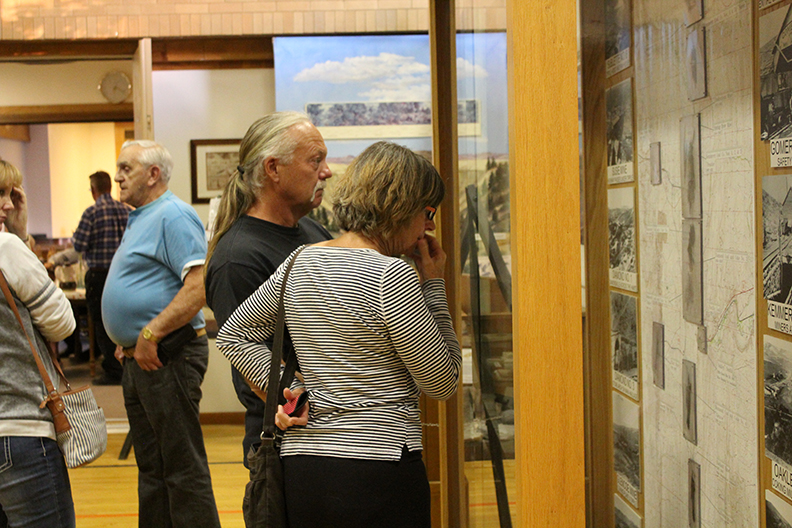 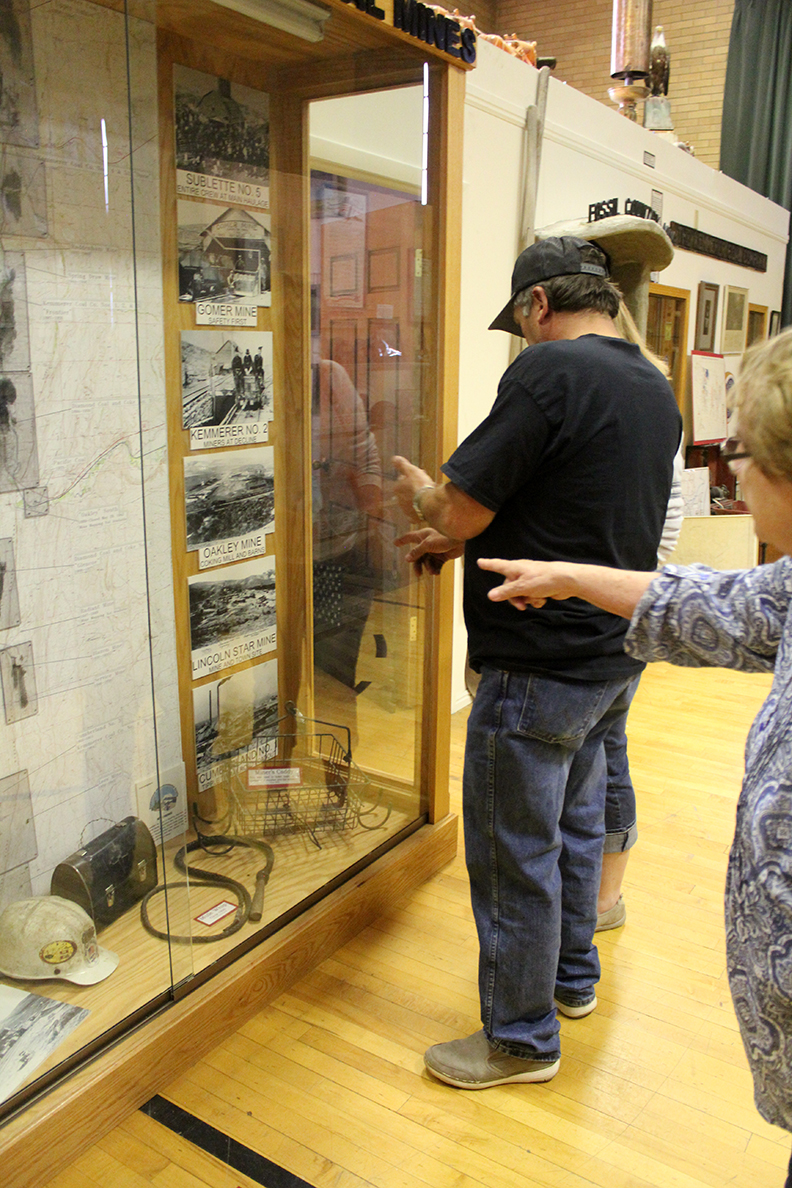 “Dragons in a Bag” by Zetta Elliott

We see you are enjoying our articles!

If you wish view the full all article, watch this short video or subscribe now for full access.

Subscribe Watch Video No, thanks! I will stick to the free stuff
Login